skip to main | skip to sidebar

The Bean from Soissons, a survivor of our lands... 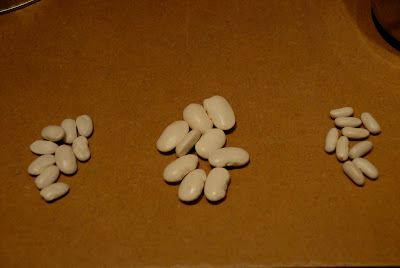 The “big bean with a tender heart” is how it is described by its producers, has nearly disapperared. The Soissons, its name adopted from the region where they are grown in the department of l’ Aisne, France, is the biggest bean in France, chubby and plump, they are also the tastiest. For several years, there were only five producers of the Soissons and no real marketing. Surprising destiny for the dried beans that grew in the region of l”Aisne, near to the Chemin des Dames, land that was ravaged during the First World War. After these difficult times, and since it had to be picked by hand, its demand by the people was lessened, and the bean was nearly forgotten.

So in 2003, the Coopérative agicole of “Haricot de Soissons” (Beans from Soissons) was created by the work of 35 productors (cereal producers, animal breeders, produce marketers, and wine makers). They gathered only 13 tonnes of beans, a much smaller amount than the report of 800 tons gathered at the beginning of the 20th century.

Rich in fiber, iron, proteins and poor in fats, this dried vegetable has no bad qualities. And also, it is really easy to cook for this winter season.

Measure 70 gms per person. Place beans in water over night. They will triple in volume. Then cook one hour with a bouquet garni. Do not salt until they are served. Be careful, if you add salt during cooking, it will harden your beans!

Once cooked, they go well with leg of lamb..or you could put them into a soup with some créme fraîche (sour cream) and a little white wine. Also, in a salad with scallions, parsley, dried tomatoes..then lightly toss with some vinegar and olive oil...It is really nutritious, well-balanced and really good!

“La fleur de sel” a gift from the sky, sea and wind 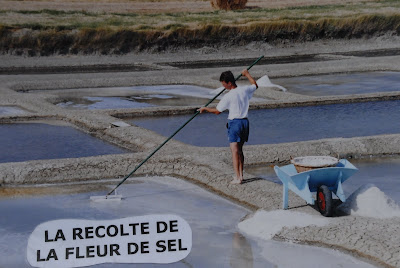 Certain summer days, between the 15th of June until the 15th of September, just when the weather is dry and the sun is shining intensely, a fine grain forms on the surface of the water: “la fleur de sel”. The “fleur de sel “ is gathered using the tools and techniques that are three centuries old. The quantities gatehred can be very small if there is too much rain. It’s color is pure white because it is never in contact with the bottom of the salty marsh. Once collected, it is dried by the wind and the sun, and does not need washing or grinding, and is totally natural. with its smell, flavor, crumbly crystals and slight humidity which dissolves on your plate is a product that should be on all tables next to some quality ground pepper.

The fleur de sel is not used for cooking, but is sprinkled directly on the food of your choice just before eating.

Our fleur de sel comes from a magnificent salt marsh called the “The Valencières” situated close to the Bay of Bourgneuf, not far from the Noirmoutier. Leaving the vendéenne Camargue, this unknown region is magnificent. One also finds delicious oysters here. If you pass by here, go visit with Saulnier, Thierry Odéon, who will be happy to explain how his salt marsh functions.

Le Sel rose de l’Himalaya (Pink rock salt of Himalaya) : rock salt of rare purity, extracted from the foot hills of the Himalayan mountains which have been carried down in backpacks by the local tribes . It is the iron contained in the salt which gives it its rose color.

Le Sel noir d’Hawai (Black Hawaiian salt) : blocks of lava have immerged in lakes that enrich the seawater and mineral salts; these crystals of black salt are formed, and are full of charcoal. A spectaculaire final touch on your plate!

Le sel fumé (smoked salt) : this sea salt is smoked under a bonfire of logs. Its taste is strong and wonderful!

Très “tendance” (trendy) at the moment, the aromatic salts are the “sel fou” that contain red pepper but also black truffles, the mixture tex-mex, with scallions and other mixtures that are enticing for the palate.

It is the norm to not use your knife to cut your salad. But, this rule is fast becoming a “has been”. Formerly, the contact with the vinegar would oxidize the knife blade, carusing an ugly dark knife, plus ruin the taste of the salad. Today, it is preferred to use your knife rather than have to chew on a large leaf of batavia!